Canine has a nose for cell phones 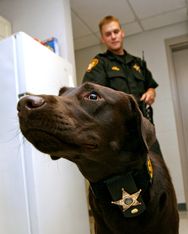 Canine has a nose for cell phones  (Middletown Journal) – Originally posted May 22, 2011

HAMILTON — Police dogs have long been trained to sniff out bombs, drugs, and humans, but Tank, who works in the Butler County Jail, has a nose for cellphones.

The 18-month-old chocolate Labrador retriever comes to work with his partner Corrections Officer Chris Morris and is key in keeping the jail and visitation rooms free of contraband.

Tank is trained to find not only cellphones, but tobacco and drugs that may be stashed under mattresses or between chair cushions during visitation.

“This is play to him,” Morris said after the energetic pup demonstrated finding a cellphone using just by scent.

After finding a phone or any other contraband, Tank sits and stares down the suspicious spot. Morris then finds the banned item.

Tank’s reward is a ball and he waits patiently to snatch it up.

“He will do anything for a ball,” Morris said, as the dog chased a bright orange one. “He will chase any ball, but this is his favorite.”

The dog is able to smell the lithium battery in a cellphone, Morris explained. But the dog has to be instructed to only search when instructed by Morris.

“We want to make sure he doesn’t just go up to anyone with a cellphone or a cigarette,” the officer said.

Morris, a four-year veteran of the sheriff’s office, has a wife and two children. Tank is an enthusiastic member of the family, too.

It is working that is really Tank’s favorite past time. According to Morris, the dog watches him get ready for work and is excited to have his work collar and badge buckled around his neck.

While Morris is at work, Tank has a kennel in the jail and comes out as needed.

He searches cells or other areas of the jail several times a week, sometimes more often if officers suspect a prisoner has contraband.

Tank is the only contraband-sniffing dog in the area and one of few in the state, Morris said. He was trained in West Virginia at Ultimate Working Dogs, a center that prepares dogs for law enforcement service. Morris and Tank have conducted demonstrations for other agencies and at the Lebanon Correctional Institution.

Tracy Landis of Ultimate Working Dog, who has been training dogs for years, said the need for a cellphone detection dog increased with the prevalence of the devices.

“There have been a few around for about four or five years,” she said. “They are used in jail and prisons because cellphones and tobacco are contraband there just as much as narcotics.”

Morris spent three weeks in training with Tank, but the dog received intensive instruction at the center for about 90 days.

Deputy Chief Anthony Dwyer said Tank makes searching for contraband quick and much easier, but he also is a deterrent.

“We have people that smuggle in dope and cellphones,” Dwyer said. “Just having him here tends to make them think twice … it stops the pipeline.”

The department has five police dogs and Dwyer said their cost is minimal after training.

“Food and vet bills, that’s about it,” he said.